Get the best pest control deal in Sydney when you book our local pest controller in your area.

No one enjoys having ants crawling around their home, eating scraps of food in the kitchen, or randomly crawling in long trails on the wall. Since New South Wales (NSW) is susceptible to drought and extreme heat, ants will seek out sources of food and water inside your house. Ants can travel long distances from their colony to seek food. Some may even end up starting a new nest in and around your property.

If you're dealing with an ant problem in your home or commercial property, you may call us for a FREE CONSULTATION. For pest control in Sydney, you can trust the masters!

How exactly can we get rid of the ants? Here are the first steps you need to take to stop ants from infesting your property.

Ants have been found nesting in vehicles have made their nests in the First Aid Kit in a glove box and inside the wing mirror of an ambulance van! If you can find the nest, it will make your job a lot easier as you can deal with it directly. If not, you will have to use sprays, dust, and baits. These will take longer, but if you use them as they should be used, they will still have a good effect. When using ant baits, you must identify the ant species so you can use the correct bait.

Dealing with an ant infestation on your property

Ants like building their nests pretty much anywhere, but they really enjoy having an access point to food and water sources. Look for any ant colony or mound located around your property.

One spot that can be a place for ants to build a nest is your dryer vent, located outside the house. Here they have a straightforward entry point to plenty of water and food since in most houses it is common practice to have a dryer vent near the kitchen. This is a great place to start looking for ants. Other places they like to hide include the porch and near doors. It would help if you also inspected flowerbeds and the rest of the yard.

(RELATED: How to get rid of ants)

Contact our team today to schedule a pest inspection.

Ants, in most cases, are considered pests when they show up in your home or office. Outdoors, however, ants serve an important function for the environment. They clean the environment and aerate the soil. This is why ants should not be killed recklessly unless there is a good reason to do so.

The Masters of Pest Control in Sydney uses the Integrated Pest Management (IPM) method to get to the bottom of a pest problem. Our pest control team will thoroughly inspect your property, remove food and water sources, locate nests, and apply pest solutions as needed so that ants won't see your property as their playground.

Ant colonies that have only one queen, such as Camponotus, can be dealt with easily. Ant species with multiple queens and nests, such as Argentine ants, Odorous house ants, and Pharaoh's ants, can be trickier to exterminate.

For instance, if you try to exterminate a Pharaoh's Ant colony using synthetic pyrethroid, this would only result in their queen ants leaving the colony and building a new colony elsewhere in your property. In the end, you'll have to pay for another pest control service.

Book the right pest control company for the job. We'll strategically remove ants on your property and give you a lasting solution!

In the old days, ant pest control measures were really unsophisticated. The pest controller would arrive at the location, unroll his long hose and deluge the front and backyard with approximately 60 litres of insecticide, typically organochlorine. This blanket spray, as often called, would cover all gardens, lawns, pathways, and the base of the house. Roof voids would have been covered with a synthetic pyrethroid powder and sometimes with space sprays with Dichlorvos. Was this effective? Well, whatever you think, this method often required a call-back as ants were still showing everywhere.

Avoid ineffective ant control methods that do not provide a lasting solution.

So, why was this method ineffective? Mostly because there was no real effort in trying to locate the nests. With this approach, insecticide would kill mostly workers but leave the larvae and pupae unharmed, leaving them to emerge as adults. The emulsion of the insecticide would be absorbed into the surface, which would prevent it from being picked up by the insects. However, this was the only and most used method that no one questioned, except for those who still had ants.

Avoid pest control that makes use of harmful or toxic chemicals.

Later on, insecticides were applied in a grid pattern to reduce the quantity used. Organochlorines were still not available at this time, and organophosphates such as chlorpyrifos were used. These were highly toxic and had a strong smell. More importantly, they were much more expensive. The breakthrough arrived with the introduction of ant baits available as solids, liquids, and viscous gels.

The majority of ant species are not considered pests but only some native and introduced ant species cause concern. Some ants make their nests in decaying wood and are suspected of causing destruction when they will only infest already decaying wood.

Most ants come from the outside of households, but they can commonly find nests in places such as roof voids, wall cavities, inside window screens, and behind bathroom tiles. Basically, ants like the same places as cockroaches, so the control methods are very similar. Because of their nesting habits, ants often leave piles of gritty matter on the horizontal surfaces or around doors and window frames. If you inspect these piles up close, they often contain dead ants removed from their nests.

No matter how hard you clean the piles, they will continue to reappear as long as ants live near. This is not big of a problem, but it tends to get bigger as ants make their way inside pantries or food containers. Luckily for us, they are not considered dangerous to human health, but very rare Pharaoh´s ants that are very common in hospital areas can sometimes carry diseases.

Where to look at home

Some species can be more active during the night. Following an ant trail that seems to disappear suddenly, you may find them appearing outside near the point of disappearance. If this proves unsuccessful, it probably means that they are nesting inside a wall or roof voids.

Since ants are social insects, they need to have a nest which is their centre of operations. Some ant species nest in decaying wood and soil, while some nest inside dwellings in many locations. 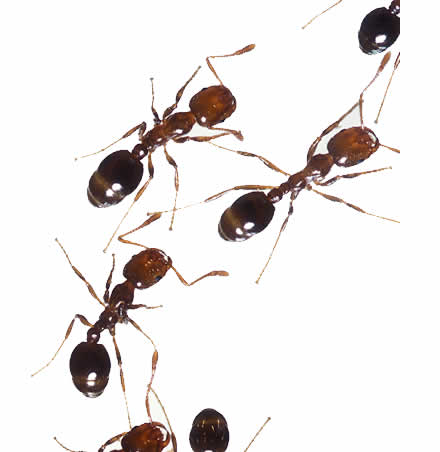 Are insecticides necessary when removing an ant infestation? Consult our team to find out!

After you have managed to identify the ant mound, your next step will be to take pest control measures. You can find many organic pest control products on the market that can kill ants. Unfortunately, most of the time, organic products are just a hit or miss and what usually happens is that once the mound has started dying in one place, they will move about 1m away and start building a new nest. The key to killing off a mound is to target the queen. You can try mixing cinnamon with baking soda and coffee grinds which will sometimes kill off ants. However, some very effective organic products do the trick, but they are a bit costly. Some of them work by dehydrating the ants so much that they die.

Another better approach is to call a professional ant expert, as they are well aware of what actions to take to help you get rid of these insects. Call (02) 8007 4666 today

We understand ants. We have serviced hundreds of homes in the past with ant infestations. We know what pest control solution will work and can save you time and money.

Some products really do the trick but can be purchased only by licensed insect experts, so if you contact us, you can be assured that we are using only the best pest solution products. We have a close to 100% success rate for ant removal.