If you spot the presence of wasps around your area, the first thing that needs to be done is to locate the nest. Normally, a wasps’ nest could be perched on a tree, lodged in a crevice in your guttering or pathway or even wedged inside a hole in your wall. Wasps will build their nests in practically any environment where they can easily navigate the outdoors to hunt for food and water. Killing wasps can be a formidable task and may need the attention of professional pest controllers.

Before you get stung, call on a wasp specialist to help you find the nest. As mentioned above, wasps’ nests are situated in hard-to-reach places. Standard wasp removal involves spraying the nest with chemicals to exterminate the population.

Why You Should Hire Professionals For Removal

Now, do not act hasty and destroy the nest as soon as you see it. Killing wasps by spraying their nests is harder than it looks. If you do this on your own, you could end up endangering yourself. The chances of being subjected to several wasp stings is very likely. Unlike bees, wasps do not die when they sting nor leave their stinger behind. As a result, they can sting you repeatedly.

So go ahead and sign up for our wasp removal service. The team at Masters Pest Control Sydney is equipped with lances that have an extended reach to shoot insecticides. We make sure to wipe out the entire colony first before proceeding to take out the nest.

When most of us think about honey bees, we often picture a friendly, harmless insect. However, that is not the case for wasps. While wasps and honey bees look similar, they're worlds apart.

Wasps have a narrow waist (known as "petiole") that separates their abdomen from their thorax. Furthermore, unlike honey bees, they come in multiple colours ranging from blue to brown and even bright red!

ABC Australia warns Western Australians about European wasps, reporting that despite being kept at bay for a long time, there are still chances of the deadly insects invading.

Luckily, thanks to various eradication programs, Australia has been able to prevent them from becoming a major threat for the past 40 years. 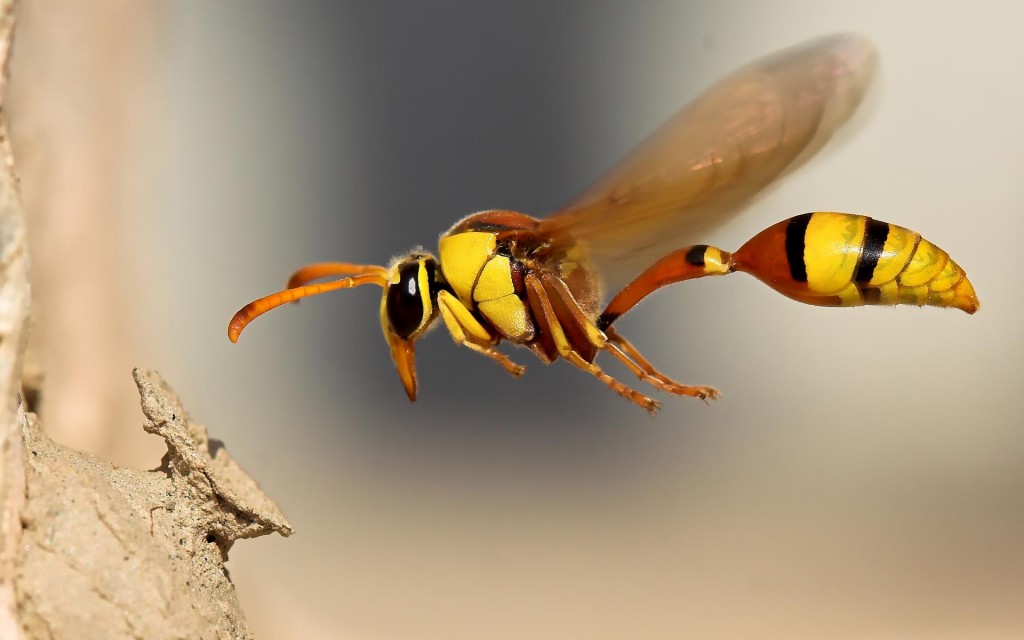 Wasps can sting more than once, unlike bees.

How Wasps Build Their Nests

Unlike honey bees, wasps build their nests by collecting papery abodes from fibre wood, which they chew into a pulp.Wasps prey on many species to survive, either for food or for their parasitic larvae.

Wasps are one of the most diverse insects, with more than 30,000 types of species in the world. However, they are sub categorised into two groups: social and solitary wasps.

Social wasps include more than a thousand species, including yellow-jackets and hornets.

Social wasps start their colonies from scratch. The colony is started by a queen wasps that has been fertilized at least a year before, surviving winter hibernation in the process.

The queen is responsible for starting a small nest and rearing worker females to expand the nest further. By the time it's summer, the colony has more than 5,000 wasps (including the queen) that slowly die by the time it's winter. The process then restarts, with new fertilized queens starting colonies from scratch.

Solitary wasps do not form colonies but are oddly the largest subgroup. This subgroup contains some of the largest wasps like cicada killers and blue and orange tarantula hawks. These wasps can grow up to 1.5 inches.

Unlike honey bees, wasps can sting repeatedly when provoked. They always attack in a group, never alone. However, wasps only attack if they get disturbed or their nest is attacked.

The male wasp does not have a stinger, only the female does. The female wasp's stinger evolves over time to help them hunt and lay eggs.

Wasps and the Ecosystem

While wasps are dangerous, they are also useful in removing other pests. This is because they feed on almost all species in the world. From ants to cockroaches, they prey on various insects.

This makes them helpful to some farmers. However, it's important to note that these types of wasps are trained properly by farmers and the ones that build colonies near homes are dangerous.

The venom in a wasp's stinger does not cause serious problems but individuals who are sensitive can develop an allergy. Since the stinger does not fall off, repeated stings can lead to severe reactions.

If you see a wasp nest near your home, do not panic. Do not approach the nest by yourself. Leave everything to a professional pest control service.

A pest control service can tactfully remove the nest without causing wasps to attack and invade your home. They have the skills and tools to carefully take care of the problem.

Masters Pest Control Sydney is a pest control service that uses effective tools and products to remove wasp nests from your home, without any problems. Furthermore, the products used by their specialists for treatments are child and pet-friendly.