Termite Season has Arrived and Many Sydney Suburbs are at Risk

No pest infestation is fun, but one of the worst to encounter is that of termites as the damage and loss they cause to homeowners can be immense. Termites are much more than a nuisance that a general bug infestation creates because they are able to cause structural damage to your house.

According to estimates, the subterranean termites cause more than 2 billion dollars of damage in a year to households and other buildings, a figure that is significantly higher than that of losses from domestic fires and heavy storms.

What Makes Termites so Dangerous?

Most of the termite species feed on dead plant material. These materials include leaf litter and wood and therefore they are harmful to wooden structures of buildings and crops. Like ants, termites are social insects and live in colonies, which means that they infest any place in large numbers. In Australia, around 300 species of termites exist of which 30 are potentially dangerous to building structures.

There are three main subtypes of termites that can infest your house:

This type of termites lives underground. They usually build their nests in dark and moist environments. Tree roots, sides and bases of building walls, and timber floors are places that termites find suitable for their habitat. If walls and floorings of any building are made of wood, keeping a check on termites becomes crucial as they will weaken the foundations and make them shallow as they feed on it. Jeopardising  the whole structural integrity of the building is unsafe and highly dangerous. Their tendency to make underground nests makes them the most harmful type of termites. 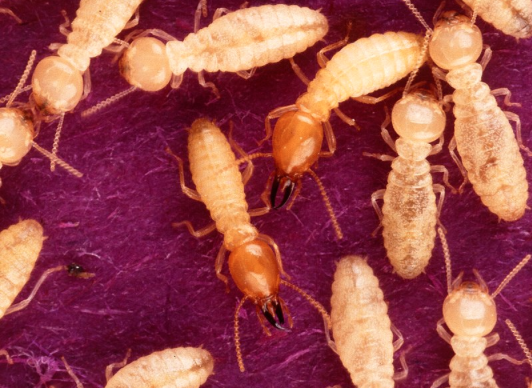 After subterranean termites, these cause the most damage to houses and buildings in Sydney. They prefer to live in moist conditions and usually make their nests above the ground.

Unlike subterranean and dampwood termites, drywood termites avoid damp conditions and grounds. They live in small colonies and feed on dry wood items. If your house is infested by dampwood termites, then wooden furniture items, wooden ceilings and frames can be their place of habitation.

Many Sydney Suburbs are at Great Risk of Termite Damage

With spring season right around the corner, households in many of the suburban areas become vulnerable to the wrath of termite infestation. North shore, Eastern Suburbs, Hills District, Northern beaches, St George, Sutherland and Western Suburbs in metropolitan Sydney get plagued with termites every year during this time of year.

Inspections: The First Line of Defence against Termite Infestation

Renowned architect and director of Archicentre (the advice service of the Australian Institute of Architects), Robert Caulfield, termed termites as one of the leading cause of structural damage in Australia.  He emphasised that people should have their house inspected for termite infestation because early detection can save a lot of money in the name of repairing and remodelling cost. In his own words, “With the average treatment and repair cost estimated to be in the order of $10,000, it's vital to limit the damage.''

As Caulfield signifies the importance of early detection of termite infestation, it is imperative to get professional help to have your property inspected before it's too late. Professional termite control teams not only do visual external inspections, they also use high-end equipment to detect the infestation and its extent. Using fibre optic cameras and thermal imaging are some of non-invasive techniques they use to look inside the walls for termite infestation. Even if your house isn't made of timber structures, termites are notorious for causing damage to even brick houses in Sydney.

If you are living in any of the discussed suburban areas, then timely inspections and termite treatments can reduce the cost you will incur should you fall victim to termite infestation.